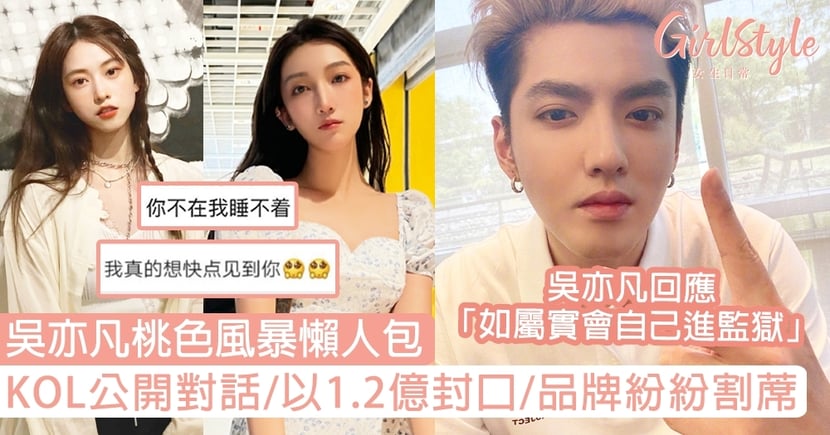 Chinese artist Kris Wu was involved in a recent sex scandal. He was allegedly involved in a “choosing concubine” scheme to lure various underaged girls into performing sexual relations with him. Multiple KOL has stepped up and spoke up about the incident. As the issue takes a turn for the worse, many official media venues and collaboration partners have issued public statements to sever relationship with Kris Wu. So, what actually happened? A Relationship Scandal
In June, a friend of 19-year-old mainland Chinese KOL Du Meizhu issued a Weibo post and accused Kris Wu of ghosting Du Meizhu in the middle of their relationship. The incident brought emotional distress to Meizhu, and she was diagnosed with depression. On the next day, Kris Wu’s management company hired an attorney to settle the issue, accused the original poster of slander and defamation, and intended to press charges. On the same day, Kris Wu posted on Weibo and stated, “no snow is pure white,” and he joked that he was providing free entertainment to everyone. He also took the opportunity to promote his new song. And Meizhu responded, “so then, let’s go our separate ways.” And with that, everyone thought that was the end of the incident. Allegations on sexual relations with underaged girls
On July 8, Du Meizhu made an unexpected post on Weibo, stating that she originally planned to let the past be the past. However, Kris Wu’s fans were cyberbullying Meizhu for the past month, and she was diagnosed with both depression and anxiety. At the same time, she also pointed out Kris Wu would often use open recruitment for his company and music video auditions as an excuse to entice at least 7 young girls to the bar. He would then use flattering words to trick the girls into sleeping with him at a hotel, and then ghosting them after. Du Meizhu said since she has stepped up to accuse Kris Wu, many other victims have reached out to her and provided evidence for Kris Wu’s actions, and they are willing to side with Meizhu. However, within 3 hours of Meizhu’s post, Kris Wu’s attorney released statements to accuse Meizhu of spreading false allegations, and the attorneys ordered Meizhu to delete the post immediately. (Alleged texts Kris Wu sent to other girls)
Babe, can you hang out with me tonight?
[Crying emoji]
I can’t sleep if you’re not here.
You’re back already?
I’m done after going on stage, so I came back early.
Miss you.
Can you come hang out with me? Also, his group of people is quite mean.
Let me tell you
What other people told me
They said they already know Kris Wu knows me.
I said why
He said don’t you know?
Before every event, his group of people
Would gather all the girls’ photos
And release them
And then they would pick
Pick the ones they will ask to go drink together
Choosing concubines?
Choosing concubines?? To flip a tile*

*In ancient China, if a King flips a tile in front of a girl, she is chosen as a concubine. Later, a conversation between Du Meizhu and Kris Wu’s attorney was leaked. In the conversation, it was evident that the attorney both sweet-talked and played hardball to coerce the Meizhu into a settlement. In the end, both parties agreed to settle for 2 million, and the attorney required Meizhu to publicly issue an apology, delete her post, and sign a commitment letter. Failed to keep quiet
Later, when Meizhu realized the commitment letter contained fraudulent language, she chose to return the settlement funds, alert the police, and resume public shaming Kris Wu. She was more serious in her accusations, and she revealed that Kris Wu allegedly mobilized his fans and his staff to defame and harass her. Kris Wu’s management company has raised the settlement fund from 2 million to 120 million RMB in get her to submit all the victims’ information and to permanently leave the public’s eye. Lastly, Meizhu also revealed that Kris would often badmouth EXO-M members, and how Kris would only last two to three minutes in bed. Kris Wu’s Response
The next day, Meizhu reiterated and ordered Kris Wu to public apologize within 24 hours, announce his retirement from the entertainment circle, and return to his birth place in Canada and to never step foot in China. Kris Wu, who has been remaining silent, finally spoke up today, and noted that because of legal procedures he was not allowed to speak, but that he “did not expect his silence would exacerbate the defamer’s accusations.” He revealed he has only seen Du Meizhu once, and the alleged “choosing concubines”, “luring”, and “under-age” accusations were all false. He claimed, “If I did such actions, don’t worry, I will go to jail myself.”

I did not response previously because I don’t want to interfere with the legal processing. I did not expect my silence would exacerbate the defamer’s accusations. I have had enough! I have only met Miss Du once during a friend’s gathering on December 5, 2020. There were no incidents of forced drinking, and confiscating cell phones. None of the “details” she described happened. There were many people at the gathering, and they are willing to provide evidence! I’m sorry to bother everyone. I repeat, there has never been any “choosing concubines”! No “luring” or “raping”! And no “underaged”! If I did such actions, don’t worry, I will go to jail myself!! I will be legally responsible for everything I said above.​
More KOL Accusations
Soon after Kris’ response, another KOL Zhang Dansan revealed her conversations with Kris Wu on her Weibo. She accused Kris Wu of sweet-talking her into drinking at a bar, and he interrogated her on whether he had sexual relations with her previous boyfriends. Because she can drink well, and she was cautious, she managed to escape. Kris Wu’s sex scandal has created so much drama in China. Many collaborating brands have made statements to sever relationship with Kris Wu. China’s official media, CCTV, has hidden or deleted posts related to Kris Wu’s new song promotion. Some external party has roughly estimated that based on Kris Wu’s past sponsorship fee, he would lose at least 300 million RMB in revenue. So, what is truth? We must wait for things to unfold.
Last edited: Jul 20, 2021

Wow. Don't know what to think anymore.
Some people are just plain 'evil'.