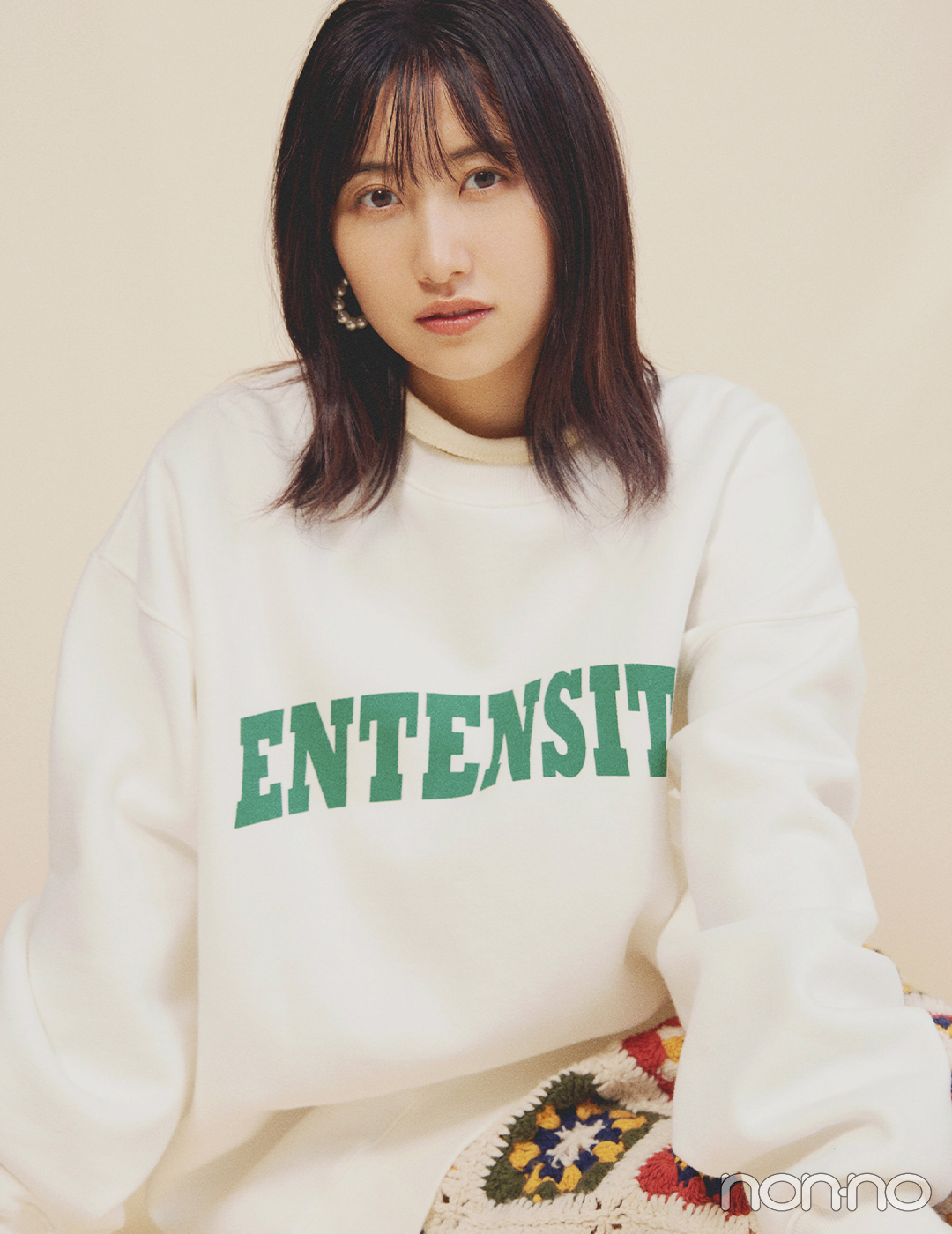 Sato Masaki will graduate from Morning Musume. '21 and Hello!Project at the group's solo concert at Nippon Budokan in Tokyo on December 13, 2021. She has continued to charm many with her unique, emotionally resonant performances and her enigmatic, innocent character, and non-non Web held a long interview with her looking back at her 10 year career. It's a must-read with discussions about her inner thoughts you can only see here. In Part 1, we discuss the new song, "Teenage Solution," and memories of her teen years, and go over her thoughts on music production and graduating from the group.

Graduation as a punctuation mark for an important presence that says, "there, there"​ 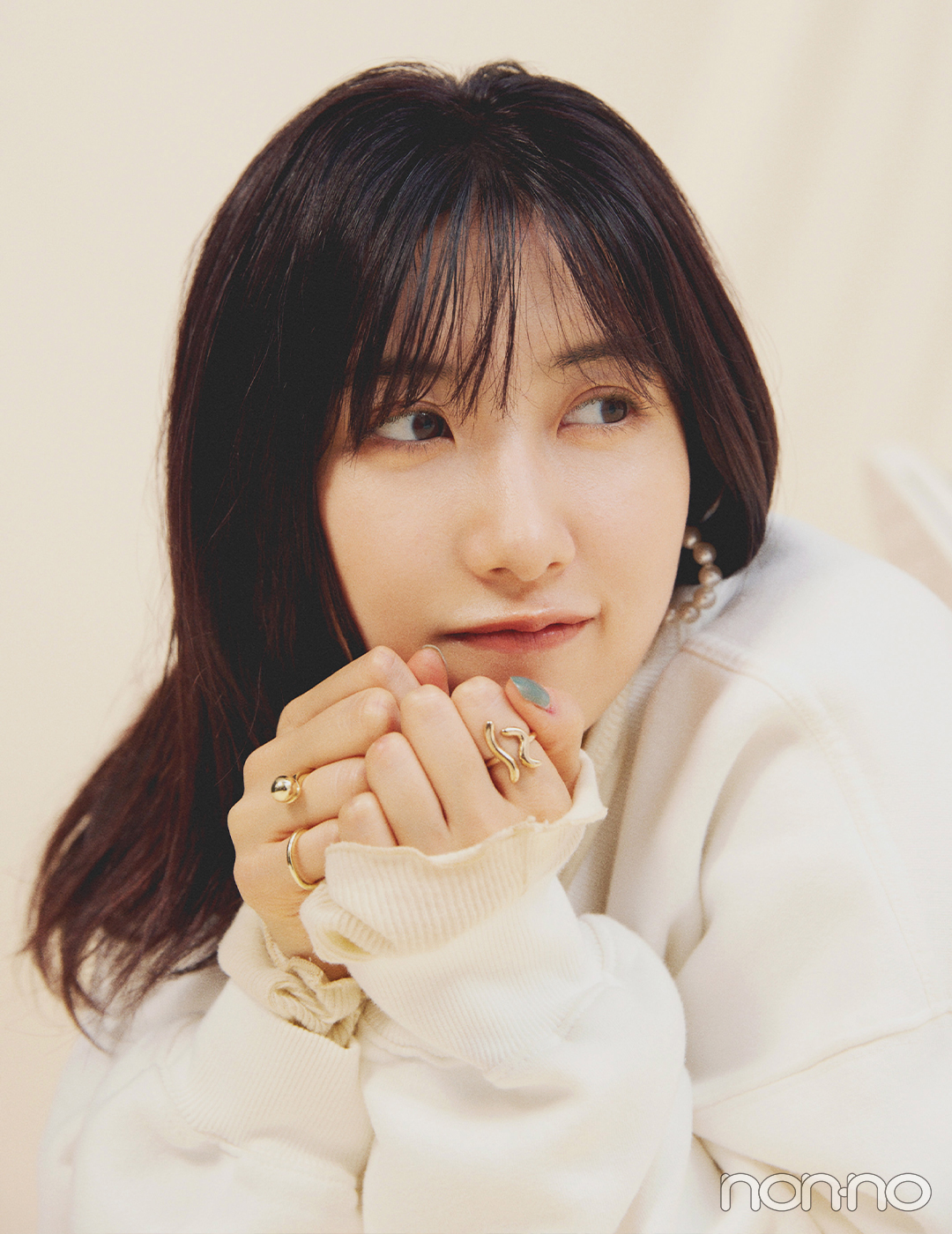 ――Let's talk about the new single, which is the last one you'll be a part of, "Teenage Solution/Yoshi Yoshi Shite Hoshii No/Beat no Wakusei." Is there anything about them that left an impression on you?​

I recorded "Teenage Solution" twice. The first one, I had actually already decided to graduate by that point, but none of the staff or other members knew. But then I started thinking about how it might be my last time seeing my favorite musical director... My throat completely closed up when I did. Even though I had a voice inside of me that was saying I wanted to do this, I couldn't bring it out at all. But I couldn't talk about it, so I left. I got contacted by a manager later, saying I could re-record it.

Yes. When I asked the manager why, they said that the director said that Sato should be able to do a little more. This director is someone who has taken good care of me since I was about 12 years old. I guess he was exactly as this single says, someone who says to me, "there, there [yoshi yoshi]."

――So he saw through you being out of sorts.​

I think so, although maybe he didn't. He's someone with a great love for music; he takes great care with each and every project. He's good at understanding me and talking to me, too. "There, there" is a phrase that's hard to understand, but my image of it is that it's more being together and improving and being able to grow yourself, rather than just patting you on the head and comforting you. That's why when I thought about graduating, it became such a big deal that it would be my last time recording with this director who had helped me grow, who helped me discover something new every time I saw him.

This director and Tsunku♂ are just like a married couple, so I understand what this director says to also be what Tsunku♂ says. I really liked everything about that creative process.

――What does Tsunku♂'s music mean to you?​

I can't talk about it in terms of feeling like or dislike, it's something that has truly helped me grow as a person. Maybe I feel that way because I'm connected to it for work... That said, I didn't fully understand that what I was doing was work until I turned 17 (laughs).

I feel like I'm closer to Tsunku♂'s songs than I am to other people. That's why I feel like it was a really big deal to put a punctuation mark on them, and even now I wonder if I'll be okay leaving them.

There have been different opportunities, like this interview, that I've gotten lately with this being my last single, but if I'm being honest, that isn't really something I want to confront. Normally, I'd write down different keywords in my notes and analyze the song in my own way to understand the music better, but this time I wasn't able to do that at all. I feel like if I face the music, I'll have to acknowledge that it's my last time recording, which I loved so much.

I want my last live to be a "normal" concert from my beloved Morning Musume.!​ 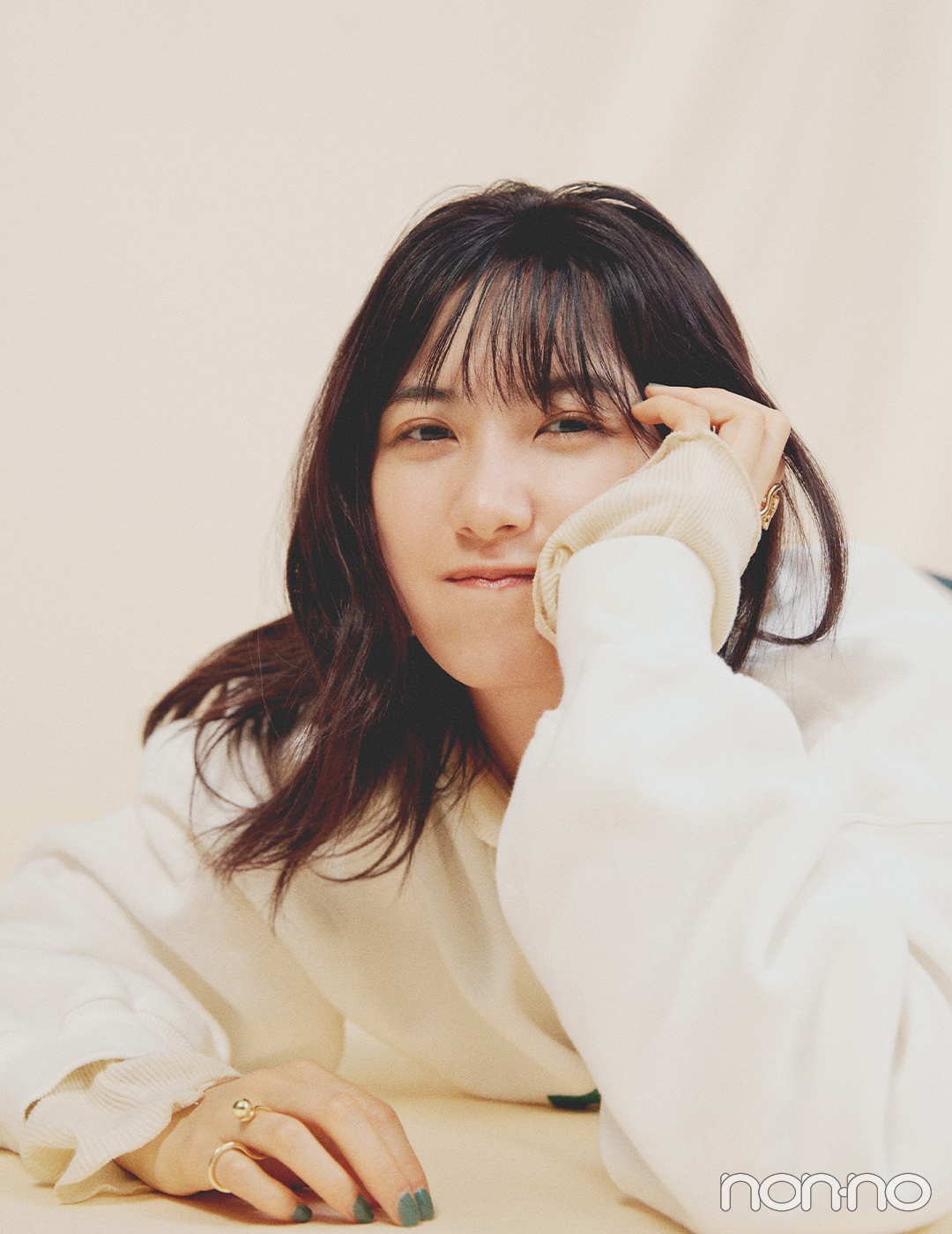 ――I'd like to hear your feelings towards the "Morning Musume. '21 Concert Teenage Solution ~Sato Masaki Graduation Special," which will be your last.​

I want to do a live that will be a "normal" one for my beloved Morning Musume, like how we always do. I told our leader, Fukumura (Mizuki), that from the beginning. I honestly felt like it would be fine if my name weren't in the concert title or if they didn't announce my graduation until the day before. Those ideas were, of course, rejected right away (laughs). But I really don't like being the main event or anything. I can't relax that way.

―― What sort of place is a concert for you?​

I don't think I'd like them if it weren't for the director I mentioned before. He always creates the medleys for the concerts, and you can feel his love for Morning Musume. there, too. I understand just how much time he takes when I listen to them. I love being able to take what Tsunku♂ has created and the director has taken care of and give that shape and present it to the fans. Being able to do that is what a concert is, as part of Morning Musume. I definitely don't think I can do that solo.

――Is there any part of work you've done outside of recordings and concerts that has stuck with you?​

I guess it's that when person A tells me to do one thing, person B will tell me to do something completely different. When I ask which I should do, both will get mad. I think I was about 15 when it started happening, but it had a huge impact on me. At that point, I'd listen to anything anyone would tell me, so I feel like became kind of an aimless people-pleaser.

――How did you overcome that?​

Now, when someone tells me something, I respond right away, and I go ask "someone I should confirm things with" afterward. I ask the director questions about music, the dance instructor about dances, and so on. I decide who I should consult on different things. Of course, I'm grateful for the people who bring things to my attention, and I understand that there is a right way to do things, but beyond creating and presenting a product, the guiding force is that "someone I should confirm things with." That's why I think there are possibly some people, who don't know why I do that, who think I'm some strange kid who doesn't listen to what they say (laughs).

――(laughs) What are some other memories from your teenage years, going with another song title from your new single?​

Maybe forgetting the lyrics during a show? It was the song "Nanchatte Renai." I tried asking my generation mate (Ishida) Ayumi during the song, but obviously I couldn't really ask in the middle of the song, but I still couldn't remember so I fudged it and sang, "Da~dadadada." The PA gave me a wild look, like, "yikes."

I threw my mic while dancing, too. Right after I had let go of the mic, my hand felt so light and I thought, "It's so much easier to dance~!" When I was leaving the stage, I could see there were lots of managers waiting for me so I got really scared. I was actually supposed to exit stage right, but I escaped by going stage left. Then I hid in the bathroom, but of course after they chewed me out (laughs).

It's just my personality, but I'm never really glad to hear people tell me I did something good or they liked something I did. It's like when you get the "excellent luck" from a fortune slip? Of course I'm happy and grateful, but I don't think it really goes any further than that, depending on how you interpret it.

One thing that made me happy was being told, "Sato can do it," when I was about 13. So many people were mad at me for things back then, but being told that I am capable of doing more, that I guess made me realize that whether I go higher or go lower is all up to me. In that way, I think I'm the type who does want someone to say, "there, there."

Understanding the "challenge of 22" and deciding to graduate​ 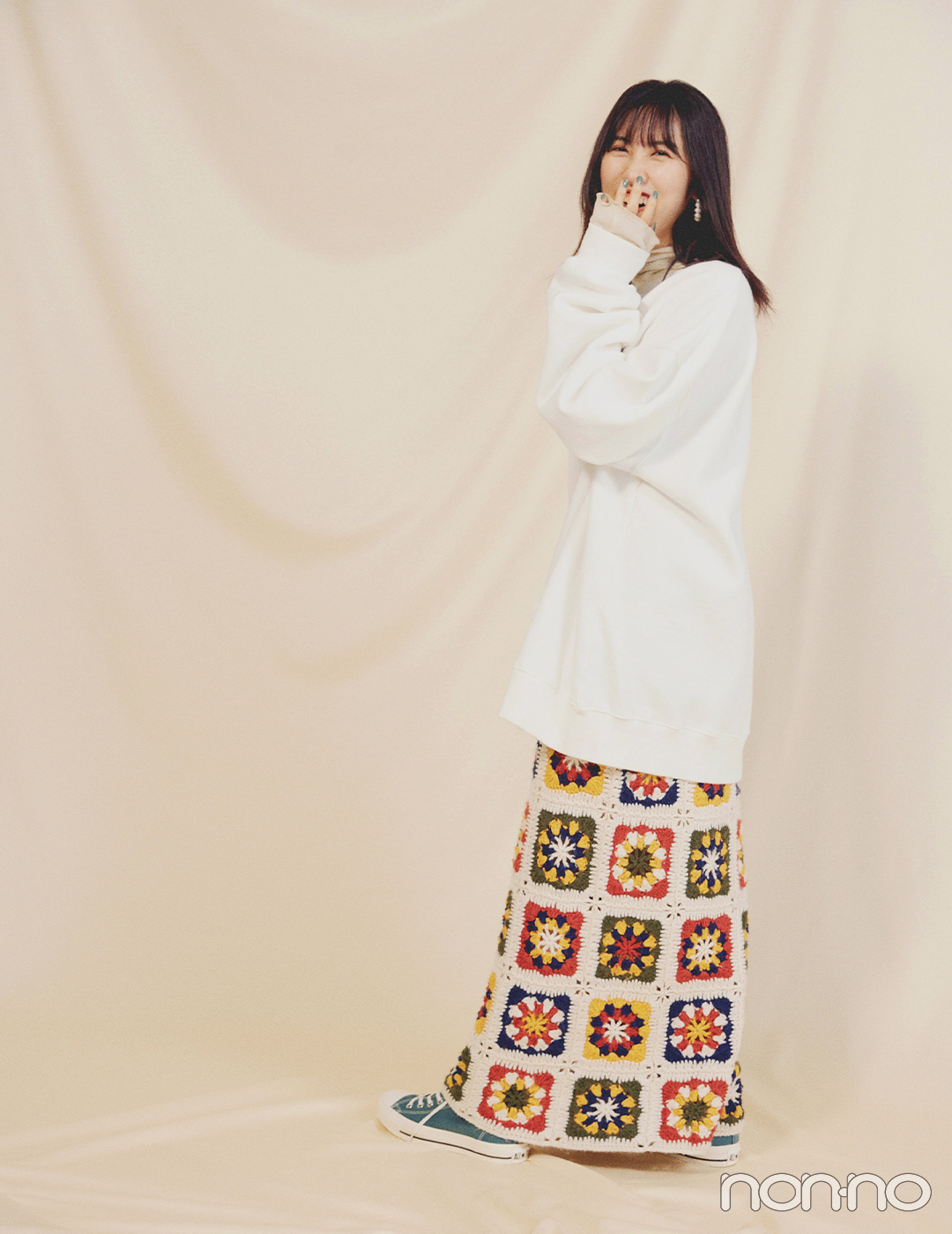 ――What do you find charming about yourself?​

Hmm, I think I'm more selfish than other people. When I get selfish, I tend to lie a little... I won't lose to anyone in that (laughs), I'll even lie about my own feelings. I honestly don't get lonely or infatuated or anything like that. How do I explain it, I guess I'm a contrarian? I hate being honest about how I feel. I can't believe in myself, so I can't believe my own opinions, that's why I'm so quick to question what people tell me.

――What were your reasons in deciding to graduate?​

Tsunku♂ said before that "22 will be Sato's challenge year," and I understood that to mean that I need to be able to have confidence in my own choices and see them through, so that was one reason. I think that challenge was originally a question of whether I'd be successful or not, but I felt like it was something different. There was also me realizing that no matter when I graduated, I'd always have some regrets or lingering feelings. And naturally, I thought about it once I got sick.

I know better than anyone how people have their strengths and weaknesses, so in 5 years, I want to be doing something that is a source of strength for others. Those others can discover something good about themselves and then become well-known in Hello!Project, for example (laughs). I certainly had a lot of struggles once I joined Morning Musume., but more than that, I got stronger. I realized it's okay to let the other members make up for the things I'm not good at, and I learned that people will understand and accept me the way I am. I think a lot of people can't accept themselves. I want to be strong for those people.

After 10 years, though, I have no idea if I'll be doing the same things. In 10 years, my younger sister will be 20 and my parents will be older, so I want to take time to spend with my family. In 10 years, I guess I'll be 32... But when I look at my seniors like Tanaka Reina or Michishige Sayumi, age doesn't seem to really matter, and so I think it just depends on me.

Profile
●Satou Masaki
Born May 7, 1999, from Hokkaido. Joined Morning Musume. in 2011 as part of the 10th generation. Special skill is piano. Nickname is Maachan. Member color is emerald green. Charms many fans with changing her way of singing and performing songs between concerts. Frequently a hot topic due to her peculiar phrases that cut to the core emotionally, like, "Happiness comes like tempura soba" (meaning: happiness isn't something you realize in the moment, it won't simply come to you just as you won't get tempura soba without ordering it).